This week it is Bloodshot -the British influence 1
Sally Timms along with fellow ex-Mekon Jon Langford made the move from Leeds to Chicago in the 1990's and rapidly became key players in the Alt Country/Americana field (delete which most annoys you) and in Bloodshot Records in particular. 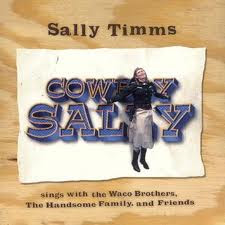 Cowboy Sally (BS016) is a 5 track EP from 1997 where Ms Timms sings with the Waco Brothers,the Handsome Family and Friends
There are four traditional country songs plus a Handsome Family cover
I've gone for a song made famous by Lefty Frizzell.
I've a few versions of this some of which might feature at a later date