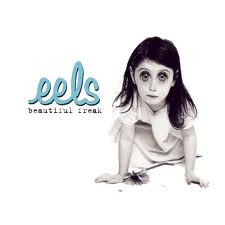 For whatever reason I have never really been a big fan of the Eels.
Maybe it is because of Susan's House which I have never really particularly liked.
Or perhaps it is because the lead singer, who appears to have disappeared up his own backside, insists on being called E.
I have a vague memory of seeing a documentary about him and all I can recall is that he smokes large cigars and is the son of a famous scientist (Hugh Everett III according to T'interweb)
The cover of the album is somewhat unsettling but this is one of their better if not best songs

The Eels - Novocaine For The Soul
Posted by Charity Chic at 17:51