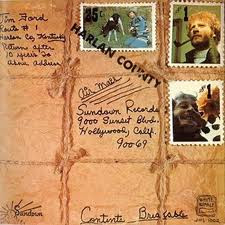 Jim Ford's song Harlan County shot to relative prominence when championed by Andy Kershaw and even appearing on Kershaw's compilation album "Great Moments in Vinyl History"
An interesting and strange character is our Mr Ford
He was kicking around in the 60's and 70's writing and performing country, pop and R&B.
His only album Harlan County was published in 1969 re-released by Demon in 1997
When Nick Lowe was in Brinsley Schwarz in the early 70's they were roped in to back Ford on a proposed follow up to Harlan County
"We spent 3 days trying to play with Jim " says Lowe "but frankly we weren't good enough"
He wrote a couple of songs for Bobby Womack including Happy Hippie
Mr Ford had a penchant for narcotic substances as the second song pretty much alludes to and was found dead in his trailer home by the Mendocino County Sheriff's department on November 18th 2007
If you do not already own Harlan County you should rectify that at the earliest opportunity.