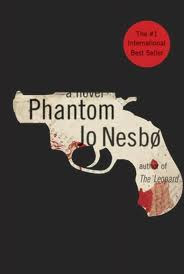 Lately on my trips to the library I have been reading the Harry Hole detective series by the Norwegian author Jo Nesbo.
His only book not to feature Harry Hole, the book Headhunters is also well worth a visit.
He is an interesting character Mr Nesbo - in addition to being a  multi-million selling author he is a former professional footballer with Molde and is the main vocalist and songwriter for Norwegian band Di Derre.
Given his interest in music references to bands often appear in his novels.
In his latest novel , Phantom, which I am currently reading there are references to the album Summerteeth by Wilco.
I was a big fan of Wilco's earlier stuff - AM,Being There, Summerteeth and the Mermaid Avenue Woody Guthrie albums with Billy Bragg.
I was a fan of Jeff Tweedy when he was in Uncle Tupelo the seminal Americana ban with Jay Ferrar who went on to form Son Volt.
However, Wilco and I gradually went our separate ways following Yankee Hotel Foxtrot when in the words of one critic they became "America's Radiohead"
Jeff Tweedy has gone on to produce Mavis Staples amongst others and his  studio in Chicago has been used by the likes of Gillian Welch (both of whom are on the long list to feature on CCM)
In keeping with the book, these tracks are taken from Summerteeth

Wilco - A Shot in the Arm

Wilco - Via Chicago
Posted by Charity Chic at 10:00