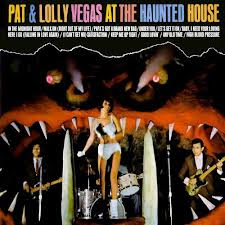 Pat and Lolly Vegas were the mainstays of the Native American/Mexican American rock group Redbone who had hits with Come and Get Your love and The Witch Queen of New Orleans.
More importantly, however, they were the backing band for Jim Ford on Harlan County -see yesterday's post.

The sleevenotes for Harlan County have a picture of the cover of Pat and Lolly Vegas at the Haunted House (above) from 1966 and and on the strength of this , not surprisingly , it was high up on my wish list for many years.
Thanks to the power of the Internet I eventually obtained a copy on CD and frankly it was a wee bit of a disappointment.
It is a mixture of bog standard covers of songs such as In The Midnight Hour, Papa's Got a Brand New Bag and (I Can't Get No) Satisfaction and a few of their own compositions a couple of which feature here.
Still it's got a fantastic cover!

Pat and Lolly Vegas - Keep Me Up Tight

Pat and Lolly Vegas - Any Old Time
Posted by Charity Chic at 13:57