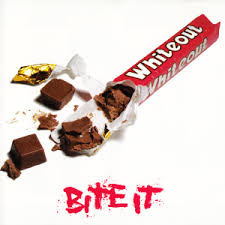 Tales from my trip to Dunoon - part 2 - the railway journey.
On the way down the ticket collector told us that someone had been held up at knifepoint on the previous train going up from Gourock to Glasgow -at 11am!
On the way back our train stopped for a while at Port Glasgow because someone had thrown something at it smashing a window.
That's Inverclyde for you!
The main town in Inverclyde is Greenock and it is the Renfrewshire rival of Paisley - particularly in football matches between Morton and St Mirren.
So much so that when Morton come to Paisley the tannoy announcer has been known to play Gypsies, Tramps and Thieves!
To my knowledge I've only got music by one band from Greenock - Whiteout and jolly good they were too.
Here is Starr Club the 1994 single on Silvertone and the fabulous Jackie's Racing from the 1995 album Bite It.
They sound not too dissimilar to Teenage Fanclub and it remains a mystery to me how some bands make it and some don't
I suppose that is one of the thing's that makes music so interesting.
So let's hear it for Andrew Caldwell, Paul Carroll, Eric Lindsay and Stuart Smith
Jingly jangly pop music!