Doon the Watter to Dunoon 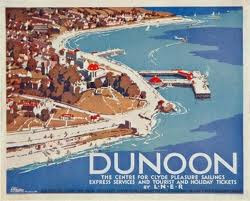 We went "doon the watter" to Dunoon on Saturday -but it was shut!
Dunoon sits on the Cowal Peninsula but can be accessed by ferry from Gourock
Up to the 60's it was a popular seaside destination for Glasgow holiday makers
Then the Americans based their Weapons of Mass Destruction in the Holy Loch from the 60's to the early 90s.
It is now a desperate place and holds the dubious honour with Campbeltown of being named the most vulnerable rural places in Scotland.
As you would expect plenty of Charity shops but no decent CDs
However I did pick up Forever Mod for 3 quid in Morrisons - 48 tracks of Ska, Soul, Blues and Jazz
Sod all to do with Mods as far as I can see but some excellent stuff from the likes of the recently departed Bobby "Blue" Bland, Arthur Alexander,Dion, little Eva, Etta James etc
Put me in mind of Mark Lamaar's Shake, Rattle and Roll
This song features - I had never heard the original and thought it was a Neil Young song.
Has to be said Neil and Crazy Horse give it a wee bit more welly than Don & Dewey