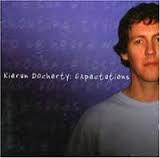 About a year or so ago I was chatting to my pal Magoo about music as we were substituting for Big Pete as the Ally Arms Quizmaster(s).
He told me that he was getting into mellower folk music (a sure sign of old age!) and one of the artists he mentioned was Kieran Docherty.
A few months latter I came across Expectations an album from his in a charity shop in St Andrews and texted Magoo for his views as to whether I should purchase it (I always like a second opinion when splashing out vast sums like a couple of quid!). He recommended that I buy it and I duly did and it's pretty good.
His only other album as far as I am aware is 2008's Hands Up If You've Had Enough.
He is also worth seeing live allegedly
From what Magoo said and from the limited info I can find out about him I think he may well be a dentist as well as a singer hence the post title.

Kieran Docherty - She's The River
Posted by Charity Chic at 19:03