He's back! - with thanks to Big Graeme, Technical Guru.
Apparently I had a corrupt profile a diagnosis that I suspect some of you good people will concur with

Anyway back to the music
To celebrate I am going to subject you to some Scottish female punk rock! 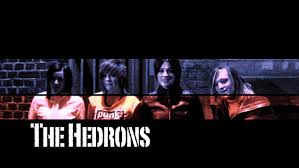 Introducing the Hedrons - Soup, Gill, Rosie and Tippi and two of their three singles from their only album 2006's One More Won't Kill Us on Measured Records
First up is the fabulous Be My Friend followed by Heatseeker
I've a promotional copy of the CD which is hopefully wort a few quid not that I would sell it - that would be illegal.
I believe that Tippi the singer when on to have a solo career of sorts

The Hedrons - Be My Friend

Hope you enjoy these tracks - some of you are probably wishing I was still off air!