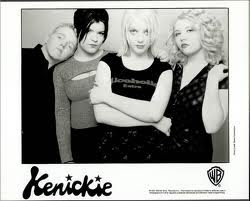 In a previous life media luvvie Lauren Laverne was the lead singer with Sunderland retro punk band Kenickie with a penchant for PVC.
The were named after one of the Pink Ladies from Grease
They were on the go from 1994 to 1998 releasing two album's At the Club in 1997 and Get In in 1998.
I saw them at King Tuts on Friday 29th May 1998 (£6 in advance) shortly before their demise.
This is their biggest hit peaking at 24 in the UK chart. I've had the single for ages but only acquired At the Club from a charity shop at the weekend.
The album is a bit shouty for me which I suspect is an age thing!
This song remains good though.
Laverne went on to TV and radio fame on BBC2's Culture Show, her own show on BBC6 Music and Channel 4's 10 O'Clock Live as well as being one of the Glastonbury stalwards.

Kenickie - In Your Car
Posted by Charity Chic at 18:19