This week's featured artists hail from Kansas City , Missouri and play  wonderful drink soaked and misery tinged honky tonk country music.
One reviewer accurately describes them as being in the beers and tears vein of classic country.
They are the aptly named Rex Hobart and the Misery Boys and this song is from their 2002 album Your Favorite Fool (BS094) 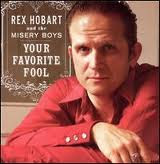 Rex is known to his mom and pop as Scott and the Misery Boys are J.B. Morris, Solomon Hofer, Blackjack Snow (superb name!)and T.C. Dobbs (not Tyrone from Coronation Street, I suspect)
The album is produced by Pate Anderson of Dwight Yoakam fame
A band that does what it says on the tin

Rex Hobart & the Misery Boys - You've Got Some Cheating To Do
Posted by Charity Chic at 18:16