You Forgot It In People 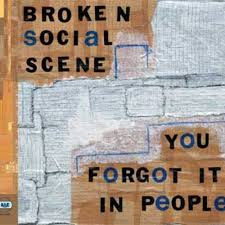 I've gone and done it again getting two acts confused. I'm putting it down to old age.

Previously we have had Wolfmother instead of Wolf Alice and more recently Soft Machine as opposed to The Soft Boys.

This time round instead of British Americana act The Broken Family Band we have the Canadian musical collective Broken Social Scene. Kevin Drew and Brendan Canning seem to be the main men with a large number of others featuring including Leslie Feist and Jason Collett who also enjoy solo careers.

From 2002 You Forgot it in People  on the Arts & Crafts label was their second studio album and the one which brought their commercial breakthrough. Wiki advises that  it  features intricate, experimental production techniques and a large number of instruments coinciding with the band's vastly expanded size. It  was critically well received and subsequently won the 2003 Alternative Album of the year in the Canadian Juno Awards.

Alternative and experimental it certainly is and I wasn't at all convinced after hearing the first couple of numbers. However, it did get gradually better although the jury is still out as to whether it is a keeper or not. A couple more listens are required.