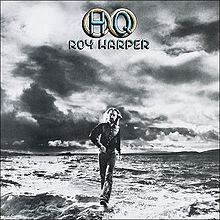 A wee reminder. After a couple of days trawling the charity shops of St Andrews with very poor results I finally struck gold picking up seven vinyl albums at 99p a pop in the British Heart Foundation  shop.

Number 3 is HQ a 1975 album  on Harvest Records from progressive folk artist Roy Harper. I'm not really a fan. I quite like his last album 2013's Man and Myth. However a pal gave me a copy of 1967's Folkjokeopus which is a right load of old nonsense.
This is is somewhere in the middle.To be honest after a first listen I wasn't particularly impressed but 99p is a bargain, in anyone's money for a vinyl version of When an Old Cricketer Leaves The Crease
Dedicated to John Snow and to the self appointed world's greatest batsman and Yorkshire man Geoff Boycott and a particular favourite of a certain John Peel

Roy Harper - When An Old Cricketer Leaves the Crease
Posted by Charity Chic at 08:00