Over There ... And Over Here 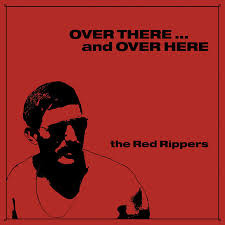 When I posted the RR selections for the Saturday Double Initials series one of the acts featured was The Red Rippers with a song called I Roll which Ramone 666 very kindly sent in my direction.
When I did a bit of research I discovered that it came from the above album which was originally released in 1983.
I was so intrigued that I headed off to Discogs and picked me up a copy.
It is a re-release on the Paradise of Bachelors label from 2012. Here is a brief quote from their blurb:
Written and recorded by Navy pilot Ed Bankston, the album’s nine battle-scarred country-boogie/psych dispatches chronicle the experiences of Bankston and his fellow vets during the Vietnam War and back home.
In fact the whole blurb is worth reading.

Another quote for you this time from the album cover:
For less than a box of ammo to sharpen your eye , you get an album that will nourish your heart and mind for years.

If the above, and the two tunes below, does not whet your appetite then I'm afraid that there is no hope for you.

The Red Rippers - Body Bag
Posted by Charity Chic at 08:00