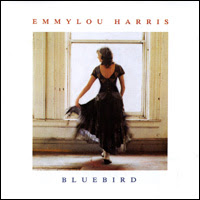 I have been accused in comments on these pages as having more holidays than teachers. Completely ludicrous. In fact I have nine weeks to wait until my next one.
I will concede that my last two breaks were reasonably close together (one from last years allocation and one from this)
So close in fact that the St Andrews Vinyl Extravaganza will now run in parallel  with the Ballantrae Bonanza given that a visit to BRICC in the Ayrshire village which deserves to be in Galloway was somewhat productive.
Nine CDs for three quid, seven selected hopefully on merit and two random choices.

I was a bit worried that Bluebird a 1989 album by Emmylou Harris might turn out to be a doubler but was prepared to take a chance given that you can't have too much Emmylou. Pleasingly it wasn't so it is another to add to the shelves.
Here are two very credible covers of songs that you all will recognise.

Emmylou Harris - I Still Miss Someone