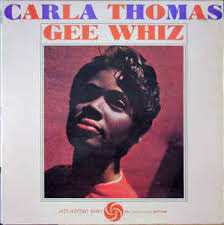 Only one Soul album in the Ballantrae haul and it's a belter.
One of the first discs I spotted was the 2012 CD re-issue of Carla Thomas' debut album Gee Whiz on the Atlantic label.
The album is originally from 1961 the year of my birth. I think that I can fairly say that it has aged better than me.
Given that Gee Whiz is one of her most famous songs at first I though that this might have been a Greatest Hits compilation.Whereas that wouldn't necessarily be a bad thing I am happier with the actual album.

She was only 21 when this was released and therefore is now 76 and thankfully still going strong.
I've gone for two of her self penned songs again showing maturity belying her  youthful years.