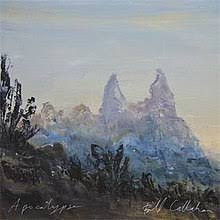 As I mentioned yesterday a recent 50p charity shop purchase Very Interesting Persons  by Findlay Napier came complete with a blank CD tucked into the sleeve.

Probably another one of Findlay's albums or maybe a live session I thought as I stuck it into the CD player. It quickly became obvious that it wasn't Findlay. But who was it?
There was some vague recognition from me around the first track which is the one featured below. Typing details of the lyrics into a popular search engine  I discovered that the track was called Drover,  the album Apocalypse and the singer Bill Callahan.

I've long been an admirer of him but the only thing I have of his is the CD single Cold Blooded Old Times by his band Smog. Talking of Smog can I point you to an excellence ICA by Richard over at JC's place.

It has to be said Apocalypse is excellent and  it is also slightly better that the Findlay Napier album.
So all in all a most welcome mystery bonus.