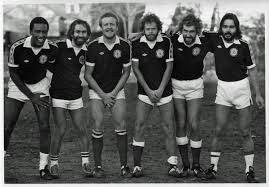 Mrs CC came in a couple of months ago with a couple of charity shop CDs one of which was a two albums on one CD by the Scottish funk and R&B band the Average White Band thus trebling the number of their records on the shelves.
The two albums in question are from the mid to late 70's when they were releasing records on the Atlantic label. I'll write that again THE Atlantic label!

It is pleasant enough stuff. There is nothing of the quality of Cut the Cake or Pick Up the Pieces but these two past muster.

Average White Band - What is Soul

Average White Band - Your Love is a Miracle
Posted by Charity Chic at 08:00