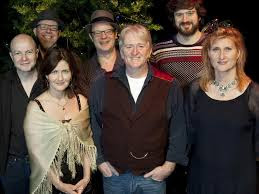 The other night along with Mrs CC and her mum I went to the Concert Hall in Glasgow for Phil Cunningham's Christmas Songbook.
An enjoyable mix of Christmas songs and carols, traditional Scottish folk music  and Christmas mash ups such as a Bluegrass version of Shakin' Stevens' Merry Christmas Everyone.
Whereas they were mucking about and having a laugh the super musicianship was very much on show.

Phil was on accordion (as you would expect), keyboards and corny jokes. He was joined by John McCusker on the fiddle, Ian Kerr on guitar, Kevin Maguire (who I used to see with the Felsons) on double bass and Kris Drever on vocals and guitar. Karen Matheson of Capercaillie fame and the irrepressible Eddi Reader also contributed some excellent vocals.

Here are songs by the three main vocalists. Kris Drever's Shining Star featured on the night.