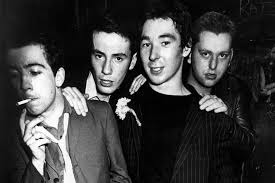 Ok, so 6 minutes 38 seconds is not a particularly long song.
But these things are all relative and it is long song  in the context that it is long for a band who were the masters of the three minute single.
Pete Shelley is joined in the songwriting credits by Steve Diggle, Stephen Garvey and John Maher.
Although it is from as far back as 1978 it seems far removed from some of their earlier singles.

It represents a change in direction and one which certainly influences a number of bands who came after. I can see  how the likes of The La's and Cast were influenced by this. You can probably come up with some others.

Buzzcocks - Why Can't I Touch It?