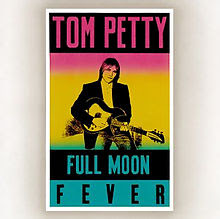 Full Moon Fever briefly joined an elite club of albums I have on vinyl and CD.
It didn't achieve this feat as it is a classic. It is good but no classic. No, the CD version was purchased as makeweight in a five CDs for two pounds offer in a charity shop in Stranraer.
I say briefly as it is going back. Not because it is bad (it isn't ) but because it is a bit gubbed in places with two or three tracks jumping or sticking.

From 1989 it was Tom Petty's first solo album  although most of the Heartbreakers and  all  the Traveling Wilburys make an appearance. It is also his most commercially successful record.
I've deliberately omitted the three hit singles Free Fallin', I Wont Back Down and Runnin' Down a Dream as you will also be familiar with them plus they have featured here before.
So instead you are getting The Apartment Song and a cover of the Gene Clark song (I'll ) Feel A Whole Lot Better first recorded by The Byrds,