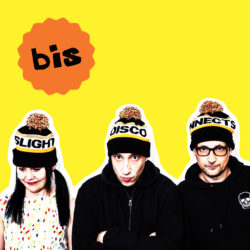 As I mentioned yesterday I only purchased about  ten or so albums released in 2018.
However as well as my random charity finds I also picked up some stuff from artists who were due a revisit or who had come to my attention for one reason or another.

So here is another list of 10 - this time in alphabetical order as opposed to rank.

bis - I had a vague recollection of bis from the mid 90's when they released the likes of Kandy Pop and Eurodisco. They have now come out of retirement and have signed to Last Night From Glasgow who are to release their album Slight Disconnects in February. I saw then live in April which led to me purchasing the album Social Dancing and am scheduled to see them again as part of the album launch.

Camera Obscura - the release of the Tracyanne and Danny album had me realising that I did not have very much by Camera Obscura despite being an admirer for many years..I only had Desire Lines so took the plunge and picked up Let's Get Out of This Country and My Maudlin Career.

Deer Tick - a band whose name I was familiar with as opposed to the music.Hearing Main Street on an Uncut compilation had me reaching for  their album Divine Providence. Rawer and rockier than I was expecting but none the worse for that.

Dr Feelgood -  the purchase of the book Lee Brilleaux - Rock'n'Roll Gentleman highlighted  the dearth of Dr Feelgood on the shelves.Rectified with the purchase of Live at the BBC  which features some classic R&B from 74-75 when they were at their peak.

Dream Syndicate - this one is down to Drew and his obsession with John Coltraine Stereo Blues. I'm a big Steve Wynn fan and have 4 of his solo albums.I had nothing by the Dream Syndicate prior to picking up 1984's Medicine Show.

Marah  -quite why I have had nothing by Marah on the shelves up until this year I will never know. I had always meant to get Kids in Philly but never got round to it until April this year.A wise way to spend some of my Grand National sweep stake money.

Mt Doubt. - A band I was aware of primarily as Annie Booth is a member. I  saw them playing at the Come Rain or Come Shine event in Kelvingrove bandstand  in July leading me to pick up a couple of singles and the album In Awe of Nothing.

Margo Price  -another name that was constantly crossing my radar leading me to acquire Midwest Farmer's Daughter. On the cusp of alternative and mainstream country I wasn't sure about it at first but it has become a grower.

Jesse Sykes and the Sweet Hereafter - a band I have always admired but one who I only had the occasional song from a compilation. Picking up Reckless Burning and Oh, My Girl with my birthday money righted that wrong

Thrum - a band I had never heard of until Ian from LNFG advised that 3 of their members were now part of the Gracious Losers. Straightaway I went and sourced their 1994 album Rifferama which is a splendid racket.

A quick hit of the search button should give you some more details on all of the above.