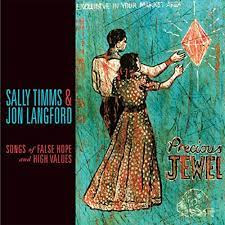 Since my recent post of Cowboy Sally's Twilight Laments for Lost Buckaroos Ernie Goggins and I have been busy setting up a Sally Timms Appreciation Society. It will run in tandem alongside our long established Kelly Hogan one. Requests to join welcome.It looks as though Walter has already subscribed. Hardly surprising as he is a man of impeccable taste.

One requirement for anyone considering taking this step will be an appreciation  of Songs of False Hope and High Values a 2000 Bloodshot mini CD album that Sally recorded with fellow ex-Mekon Jon Langford
It was a limited edition of 2000 copies.Mine is number 1523.

I think it only fair that we have a song featuring them both together followed by one from Sally then one from Jon.

Sally Timms -Down From Dover