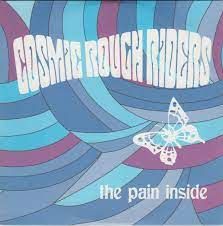 2022 Charity Shop Purchases #9 - Cosmic Rough Riders -The Pain Inside (CD single)
One look at the cover of The Pain Inside is enough to confirm that it was taken from the majestic 2000 album Enjoy the Melodic Sunshine by Cosmic Rough Riders. It was also on the album Panorama given that most of the tracks on ETMS were taken from their first two self- released albums Deliverance and  the afore- mentioned Panorama.
Release by Poptones in 2001 it has the same distinctive artwork as ETMS. I'm a bit surprised that it was released as a single. Not because it isn't good - it is - but because there were so many great songs to choose from.
I have the vinyl reissue of Enjoy the Melodic Sunshine on order to compliment the CD version so shortly I will have three copies of this song. It is the first time that I have had the other two songs in my possession. They both appear on the deluxe version of the album which I don't have.
This one is a keeper
Cosmic Rough Riders - The Pain Inside
Cosmic Rough Riders - I Got Over You
Cosmic Rough Riders - Camera Shy
Posted by Charity Chic at 08:00