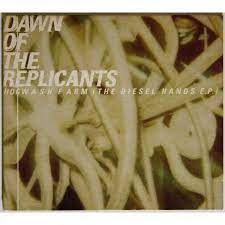 2022 Charity Shop Purchases #10  Dawn of the Replicants - Hogwash Farm (The Diesel Hands EP)
Dawn of the Replicants were an indie band from Galashiels in the Scottish Borders who were championed by John Peel and Mark Radcliffe. For some reason I have been under the erroneous impression that they were one of the many bands fronted by Davy Henderson whereas their members for the featutured record were actually Donald Kyle, Grant Pringle, Mike Small and Paul Vickers.
This EP is the follow up to their 1998 debut album One Head, Two Arms , Two Legs.
This EP also marks their debut on these pages despite me having owned their second album from 1999 Wrong Town, Wrong Planet, Three Hours Late for many years. All three records were released by East West Records a subsidiary of  Warner Brothers
Hogwash Farm reached number 65 in the UK singles charts in 1998 with the band playing both Glastonbury and Reading.
All four songs are excellent with my current favourite being Night Train to  Lichtenstein.
I think that the album  requires a long overdue listen.
Dawn of the Replicants - Hogwash Farm (Re-Built)
Dawn of the Replicants - Night Train to Lichtenstein
Dawn of the Replicants -The Duchess of Surin
Posted by Charity Chic at 08:00