Seen at King Tuts - The Crockets 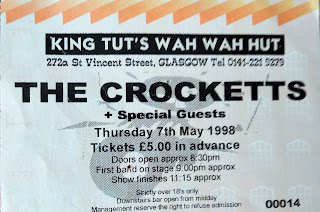 I suspect that I went to see The Crocketts on the back of their single Flower Girl which I heard on the radio and subsequently bought. I can think of no other reason as up until now that's pretty much all I know about them.

Although a Welsh band their lead singer Davey McManus was Irish with the guitarist Daniel Harris and bassist Richard Carter both English. Only drummer Owen Hopkin was actually Welsh. When they split in 2002 McManus and Hopkin went on to form the Crimea.

And I'm afraid that's it.

I've absolutely no recollection of the concert although I would imagine that my ears were ringing for a few days afterwards. Here are the four tracks from the CD single which in total last less than 10 minutes. They are pretty shouty in places something that when I was Skinny & Wirey I was not averse to but something that in general I try to avoid now.