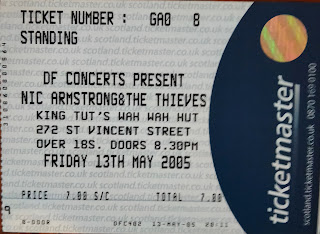 I'm not quite sure what made me and ny pal Goggs go to see Nic Armstrong & the Thieves. It could have been just for something to do on a Friday night or more probably because I had heard one of their tracks on the radio - most probably Down Home Girl.

Whatever the recent they were absolutely fantastic. I've gone back to a previous post where I described it  60's throwback stuff with more than a passing nod to the blues. The band were on fire.

On the back of the concert I purchased The Greatest White Liar an album attributed to just Nic Armstrong and released by One Little Indian . Unfortunately it did not come close to matching their live sound.

We subsequently went to see them again on their next visit to Glasgow this time at Barfly and came away quite disappointed. I think that we must have caught them at a moment in time when all the stars aligned.

I was going to say that I never bothered picking up any of their other stuff but from what I can ascertain they have  never released anything since. There were a couple of EPs /CD singles which preceded the album.

Another small star in the musical galaxy.

Nic Armstrong - I Can't Stand It

Nic Armstrong -In Your Arms On My Mind