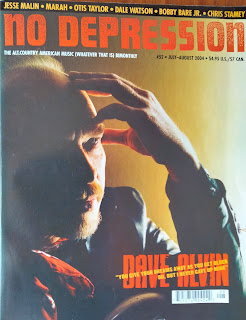 No Depression - The Bi-monthly Journal of Alt- Country
#52 -   July to August  2004
For the second issue running I have the album released  around the date of the edition's issue with the artist appearing on the cover.
Last week it was Loretta Lynn with Van Lear Rose, this week Dave Alvin with Ashgrove. If there was ever a shoe-in for the cover star of No Depression Dave Alvin is your man.
Ashgrove was released by Yep Roc on 15th June 2004 and is no stranger to these pages.Indeed it was one of the 50 Americana Albums You Should Hear Before You Die
Dave was a working class blue collar kid from Downey, California who along with brother Phil had a love of music and as very young teenagers they used to travel a few miles to the Ashgove nightclub in Hollywood to listen to the likes of Big Joe Turner, T-Bone Walker, Lightnin' Hopkins and the Reverend Gary Davis.
A musical education which held the brothers in good stead when they went on to form the Rock'n'Roll/Rockabilly Band The Blasters.Their show at the Renfrew Ferry in 2003 remains one of the top 10 gigs that I have ever been to 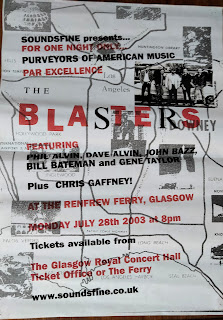 I don't think that I have ever seen him solo but I did see see him at St Lukes in October 2019 alongside Jimmie Dale Gilmore in another terrific show.
I've posted songs from Ashgrove on a number of occasions before so I will restrict myself to the title track this time round along with the two tracks from the pre-order bonus CD which I got when I ordered the album from Yep Roc ( from the days when postage for overseas albums was still affordable)
Plenty of options this week from the One from the Top.I've gone for Dale Watson with Texas Boogie which as far as I am aware has never graced these pages before.
Dave Alvin - Ashgrove
Dave Alvin - Evening Sun
Dave Alvin - Handsome Molly
Dale Watson - Texas Boogie
Posted by Charity Chic at 08:00