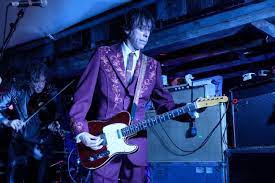 I was sad to read over the weekend of the death of Dallas Wood singer and guitarist of the great Canadian band The Sadies. He was only 48 and it seems that he died of natural causes while under doctor’s care for a coronary illness discovered earlier last week.

The Sadies are ( and sadly maybe now were) a  rock'n'roll/surf guitar/alternative country band from Toronto. (described by Allmusic as playing a signature stew of surf,soul and country).They have been on the go since 1998 and are fairly prolific releasing around 20 albums since then.

I have some of their earlier stuff mainly from the Bloodshot era. They are a band who were centred around Dallas and his brother Travis. I've seen them a couple of times and they always put on a blistering show with some tremdous guitar work from Dallas.

By way of tribute here are a song each from  Tremendous Efforts (Bloodshot, 2001), Mayors of the Moon by Jon Langford and his Sadies (Bloodshot, 2002) and Favourite Colours (Yep Roc 2004).

The Sadies - Pass the Chutney