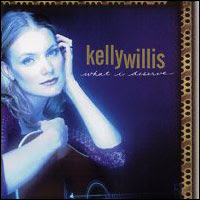 What I deserve and indeed what you deserve on a Friday is some music by the Americana artist Kelly Willis
I've featured her once before but not with anything from the only album of her's  that I have namely 1999's What I Deserve on the Rykodisc label. It was her fourth studio album There have been another seven since.
Kelly and her husband and fellow musician Bruce Robison stay in Austin where they are seen as Alt Country royalty.
Bruce writes a few of the songs on the album (including the two below) where he appears with his brother Charlie and the likes of Chuck Prophet and Jon Dee Graham. What I Deserve is seen as a response to the treatment and the way she was marketed as an artist on her previous label MCA

Robbie Fulks does not appear on the album nor does the song Parallel Bars but I wasn't about to pass up an opportunity to share it with you.

Kelly Willis - Not Forgotten You