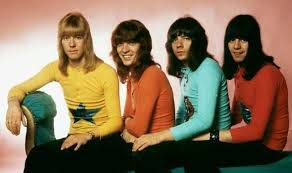 A final Sweet related treat after Rachel and Matthew.
It's Brian, Mick, Steve and Andy for you this week. known collectively as The Sweet.
A British Glam Rock band who gradually became rockier as the years progressed.

Let's start in 1973 with the masterpiece that is Blockbuster. It was great then and it is still great now. Absolute pop perfection.
Moving on to 1975 we have Fox on the Run  and finally from 1979 their last top 10 single Love is Like Oxygen

There have been various reformed versions since the mid 80's often competing with each other but in reality it was all over by then
Lead singer Brian Connolly was a half brother of Marc McManus of Taggart fame.They both liked a drink.

The Sweet - Fox on the Run

The Sweet - Love is Like Oxygen
Posted by Charity Chic at 08:00