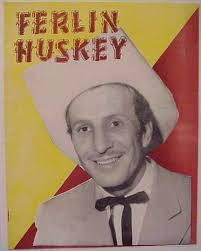 Long suffering visitors may recall a series called Vintage Country Vinyl running from June to September 2016. It ground to a halt when I ran out of material. The good news is that it's back courtesy of me picking up a veritable slab of country for next to nothing in my local charity shop a few weeks ago.
And the even better news is that most of the artists have never featured here before.


One who has however, albeit briefly, is the wonderfully monikered Ferlin Husky.
He is of course most famous  for the song Wings of a Dove from 1960 which featured last time round.
Nothing as famous on The Country Sounds of Ferlin Husky, a Music for Pleasure compilation which is featuring today.
Side one is pretty poor but side two starts of reasonably well with the two songs featured below. A country song about cheating - who would have thunk it!


Ferlin fact - he began his recording career using the name of Terry Preston a name he ended up giving to his seventh child.


More of the same next Sunday.

Ferlin Husky - She Cheats On Me

Ferlin Husky - Too Soon To Know
Posted by Charity Chic at 08:00