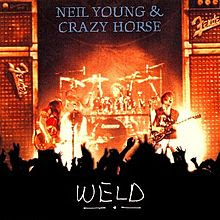 My research for this post consisted of listening to both discs of Weld on the commute to and from work  last week. All 16 tracks, all 121 minutes and 49 seconds.
A live album from 1991.Neil claims that he permanently damaged his hearing while mixing the album. I may have done the same while listening to it.
Neil Young at his thrashiest. Crazy Horse at their craziest. Look at those amps!!

There were about half a dozen classic songs in contention. After much deliberation I've gone for this one which at 14 minutes means it can double up as a Monday Long Song.

My abiding memory of this song was it being belted  out by me and three others  in a taxi late at night as we criss-crossed Edinburgh  to pick up a carry out after climbing some scaffolding but prior to getting a taxi to St Abbs and back (about an 80 mile round trip). Drink was involved.

Neil Young & Crazy Horse -Like a Hurricane
Posted by Charity Chic at 08:00