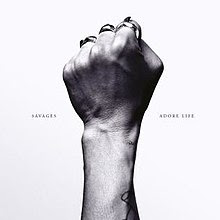 It was The Robster from the much missed Is This the Life? blog who first brought English post punk band Savages to my attention.

Adore Life is their second album , Silence Yourself being the first.
I was quite surprised to note that it was released as far back as January 2016 (on the Matador label) as I didn't think it was quite as old as that.A sure sign that I am getting older.
It got to number 26 in the UK  charts and was also a a Mercury Prize nominee.It garnered a fair amount of critical praise and indeed hype.

Lead singer Jehnny Beth is often compared to Siouxsie Sioux and it is easy to see why.

Critic Ludovic Hunter-Tilney described the music as, "Distorted guitars set up flayed layers of sound, backed by sinewy drums and bass"
Meets the criteria for this series then.


Savages - I Need Something New
Posted by Charity Chic at 08:00