Where Cairo rhymed with Giro 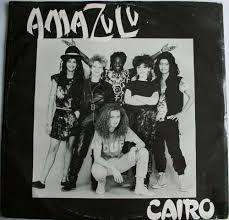 I took a wee bit of a punt when picking up the 12 inch version of Cairo by Amazulu which turns out to having been their first single from as far back as 1983.
I had a vague recollection of them having appeared on The Young Ones but couldn't really remember any of their music.
How could I have forgotten Too Good to be Forgotten?
Turns out that Cairo is a pretty pleasant if hardly earth shattering piece of British ska pop.
The b-side numbers are not too shabby either - the first paying tribute to the women from Greenham Common with the second being about God know's what.