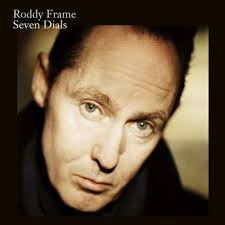 It's not very often that you see a Roddy Frame solo album in a charity shop.
Indeed, it has only happened to me once , recently in Stanraer, and needless to say I took the opportunity to grab Seven Dials with both hands.
From 2014 it is his first studio album since 2006's Western Skies and only his fourth in sixteen years.

Uncut gave it 8/10 and described it as being both instantly accessible yet full of detail and depth
I'm not yet sure as to what I think the best tracks are and have chosen these two pretty much at random.
Like Western Skies I suspect it will take a good few listens.

Roddy Frame - The Other Side
Posted by Charity Chic at 08:00