Just Beyond the River 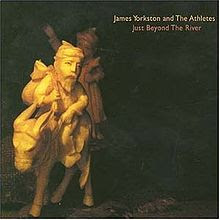 2004's  Just Beyond the River on the Domino label was the second album by James Yorkston and the Athletes and their most successful in chart terms reaching the dizzying heights of number 155 on the UK album charts.
The album is produced by Keiran Hebden aka Four Tet
A native of Fife Mr Yorkston has connections with the Fence Collective and was a childhood friend and neighbour of DJ Vic Galloway
He was working in a bookshop in Edinburgh when he sent a single to John Martyn leading to him supporting Martyn on tour where he was spotted by Laurence Bell of Domino Records.

A recent find in a Stranraer charity shop.

James Yorkston & the Athletes - Hermitage
Posted by Charity Chic at 08:00