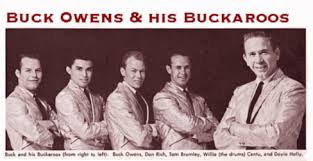 The death of this series has been temporarily exaggerated.
I had intended to put it to bed after last week's post but a couple of new charity shop purchases have persuaded me to extend it by one or maybe two weeks (dependent on the recording quality of the second purchase which is not in the best of condition).
No such problems however with The No. 1 Country Hits of Buck Owens & his Buckaroos
It contains 12 consecutive hits from 1963 to 1966 by the man from Bakersfield
it includes some songs that I and probably you are familiar with such as Act  Naturally and Together Again plus a good few that are new to me.
I've decided to go with two of them

Buck Owens & his Buckaroos - Before You Go

Buck Owens & his Buckaroos - Waitin' in Your Welfare Line
Posted by Charity Chic at 08:00