Troubled by the Fire 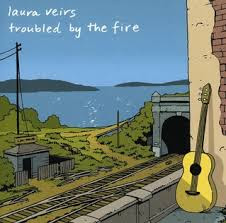 Let's stick with the elements for a bit - yesterday water, today fire
Troubled by the Fire from 2003 is the third album by  American  singer -songwriter Laura Veirs on the Bella Union label.
I'd vaguely heard of her and liked a song from a compilation so I acquired this a year or so ago. After a cursory listen it was filed away as is often the case until I dusted it  down a few days ago.
Not bad - could be a grower.
With reference to the second song the internet tells me that John Vogelin is the name of a New Mexican rancher in the 1962 novel Fire on the Mountain by Edward Abbey.
I was blissfully unaware of this. All that I knew was that the song contains yodeling and that is good enough for me.
She is married to Tucker Martine the go to producer for Americana bands.

Laure Veirs - The Ballad of John Vogelin
Posted by Charity Chic at 08:00