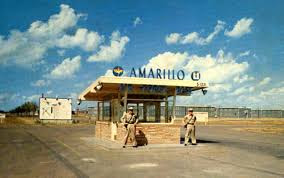 In the comments section on The Chain over at Jez' place (probably the blogging highlight of the week) I made a brief comment on my one and only time in Amarillo, Texas. I was asked to expand so here goes.

A number of years ago I was travelling coast to coast in the States from LA to Boston with a couple of pals Matho and Donno.
We had spent the previous night in Gallup, New Mexico part of a Native American reservation in a motel so grubby that we slept fully clothes on top of the beds.
As we left Donno could not resist rolling down the window and asking a local "is this the way to Amarillo?"

We got to Amarillo that evening and checked into a Motel 6. We went for a meal and a few drinks being served by John the Vision Impaired Barman (his introductory words to us)
After a few we asked if there were any other drinking establishments nearby and were directed to a local bar.
Given all the motor bikes outside and the Guns'n'Roses music blaring out perhaps we should  have known better.One beer led to another and we got chatting to a guy I shall refer to as Zip Dog given that was the name on his business card which he gave to us.
He appeared to do general errands including returning your library book and bathing your bird. I've lost my card but Matho has his laminated and produces it when telling the story.
The bar was closing and Zip Dog suggested we join him for a cup of Hot Joe(coffee to you and me) so we piled into his El Camino truck
We noticed he has a gun in the truck (perhaps not unusual in Texas) and it was about this time he casually announced he was on the run from the law. He also announced we were taking a detour to see his girlfriend. It transpired that she was nothing of the sort but a woman he was fixated with who stayed with her partner in a run down motel with bullet holes in the windows.
As he went to the door we thought it was probably a good time to do a runner and took off in the pitch dark ending up in a nearby turkey compound.
We hid there for about an hour as he cruised up and down looking for us before driving off.
One of my pals had to evacuate his bowels. I would say it was down to fear if he hadn't done the same thing in Stockwell Street, Glasgow a few months previously.

We eventually tentatively left the compound and wandered about until we found a building with lights on.
It was a Care Home and when we rang the bell the lady who answered was from Kelso in Scotland!
We got a taxi back to our motel from there to end a somewhat memorable evening.