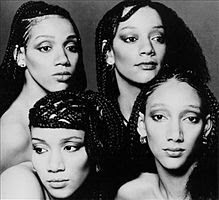 What with my Southern Soul series followed by the more generic Some Sunday Soul I have just about exhausted my soul collection.
So unless there are any new purchases there will be a degree of revisiting some of the artists who have previously featured.
As a stopgap today we feature some disco soul which would not have been out of place on Scott's excellent Disco Friday series.
Here are Kathie, Debbie, Kim and Joni Sledge who are collectively know of course as Sister Sledge.
They came up with some fantastic records aided and abetted by the musicianship and production genius of those Chic chaps Bernard Edwards and Nile Rogers.
A quartet from 1971 to 1989 when Kathie left to pursue a solo career they are still going strong as a trio

These will get you moving