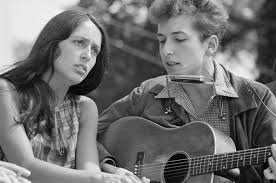 The world and his wife have covered Bob Dylan songs over the years.
Surely, however, few have more entitlement to do so than Joan Baez.
Baez was already an established star when she first met Dylan in 1961 in Greenwich Village and apparently he did not make an immediate impression.
However as their paths increasingly crossed they became involved in an on/off relationship documented here


Their relationship also features in the great D.A.Pennebaker documentary Don't Look Back covering Dylan's 1965 tour of the UK.
Here Bob and Joan get stuck into a bit of Hank Williams