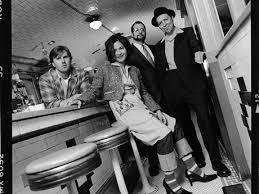 Anna Fermin was born in the Phillipines but grew up in Kenosha, Winsconsin.
Upon moving to Chicago to attend Art school she formed the band Trigger Gospel with the name taken from a Western paperback.
They were active from 1997 to 2003 reappearing in 2007  with Anna resurfacing again in 2012 with a more poppy music as opposed to her country/Americana roots.
These two songs are the first and last songs from their 2003 album on the Undertow label Oh.The Stories We Told.
It is a wee while since I have played this and to be honest with the exception of these two tracks none particularly jumped out at me
You will recognize the second one as it is Steve Earle cover.
The album is produced by the band and the late Jay Bennett of Wilco fame

Anna Fermin's Trigger Gospel -Are You Gonna Miss Me Too

Anna Fermin's Trigger Gospel - Down The Road
Posted by Charity Chic at 08:00