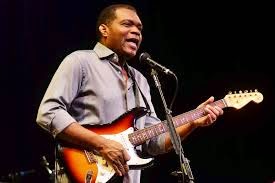 I like a little bit of Robert Cray
I have a couple of  his mid 80s albums (Strong Persuader and Don't Be Afraid of The Dark) purchased from the much missed Echo record shop on Glasgow's Byres Road.

The Blues Collection however takes us back to 1980 and Robert's debut album Who's Been Talkin' although he had been performing with the Robert Cray Band in Eugene, Oregon for a number of years prior to this release.
He even had an uncredited part as the bass player in the house party band Otis Day and the Knights in the film National Lampoon's Animal House.

He has gone on to pick up 5 Grammy Awards and is one of the very few members of The Blues Collection still with us at the tender age of  61.
Plenty of life in the old dog yet.

Robert Cray Band -Too Many Cooks

Robert Cray Band -Who's Been Talkin'
Posted by Charity Chic at 08:00