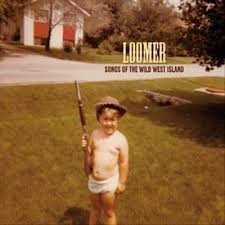 Albums I've bought because of the cover? - Song of the Wild West Island by Loomer?
Quite possibly
Purchased in the previously mentioned Greenhouse in Dingwall.
Although immediately attracted by the cover I had it in the back of my mind that I had vaguely heard of them. I was wrong there.
Loomer is both a band and a person - the person being Scott Loomer on vocals, guitar and "cheater's banjo"? (no, me neither)
As a bonus it turned out to be a pound well spent as it is a pretty good slice of Americana.
Shades of Jay Ferrar and Son Volt in places which is no bad thing.