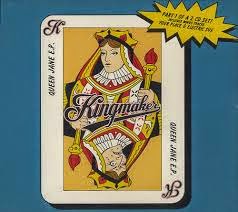 It's time for 10 minutes or so of some pretty good indie pop from 1993
Kingmaker were a three piece from Kingston on Hull who reached number 29 in the UK singles charts with Queen Jane.
I have CD 1 of a 2 CD set which includes Your Place and Electric Sue in addition to the title track
They produced 4 albums and about a dozen singles between 1991 and 1995 but never really came to anything.
Their biggest claim to fame appears to be that a pre- Pablo Honey Radiohead supported them on tour in 1992
I saw them in 1995 at King Tuts by which time Radiohead had  thankfully gone onto bigger things