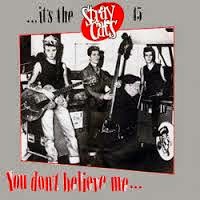 You Don't Believe Me is the third of the five Stray Cats singles in my brothers box and is the one that I , and I suspect  most of you will be least familiar with
Their fourth single , their third released in 1981, and the first one taken from their second album Gonna Ball.
It entered the UK charts on 7th November 1981 but only hung around for 3 weeks peaking at number 57.

The three band members receive writing credits for this song with Brian Setzer being credited for the b-side Cross that Bridge
Gonna Ball only reached number 48 in the album charts compared to Stray Cats' number 6 suggesting that commercially the band had already peaked.

Stray Cats - You Don't Believe Me

Stray Cats - Cross That Bridge
Posted by Charity Chic at 08:00