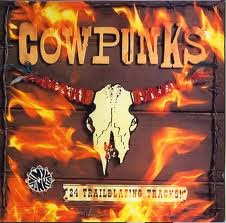 George's recent post featuring Lash Lariat had me reaching into the Americana Compilations section to retrieve Cowpunks  a 1996 compilation from Vinyl Junkie records.
In that grand punk tradition some of the 24 Trailblazing Tracks are a bit rough round the edges but they are none the worse for that and in some ways it is part of their charm.

Half the songs on the record are exclusive to Cowpunks so it is only fair that we feature some of them
We'll start with The Coal Porters, a band fronted by Sid Griffin, with the much covered truck driving song Six Days on the Road.
This is followed by another cover  from Louisville's finest Freakwater with a magnificent interpretation of Richard Thomson's Withered and Died.
And finally a true original from Ottawa's Furnaceface with their tribute to Tipper Gore the wife of former Vice President Al and the person responsible for introducing Parental Advisory stickers (aka Tipper Stickers) onto CDs and records. As you might expect this is somewhat of a protest song and therefore contains the occasional sweary word.

The Coal Porters - Six Days on the Road

Furnaceface - We Love You, Tipper Gore