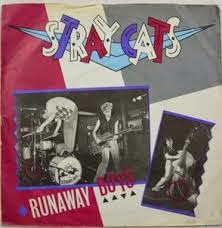 Pottering about at my mother's the other day I stumbled across a small singles box containing four of five Stray Cats singles belonging to my brother.
I thought it would be a good idea to dust them down, give them a listen and share with you good people.
So for starters here is their debut single from 1980 Runaway Boys written by Brian Setzer and Jimmy McDonnell (aka Slim Jim Phantom)
The b-side is My One Desire written by Dorsey Burnette brother of Johnny and a member of the Rock'n'Roll Trio.
It entered the UK singles charts on 29th November 1980 and was in the  charts for 10 weeks peaking at number 9 their equal highest position along with Rock This Town

Stray Cats - My One Desire
Posted by Charity Chic at 08:00