Luca Brasi Sleeps With the Fishes 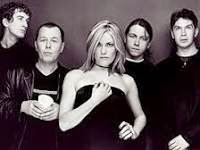 Back in a previous life the Queen of the Airwaves Cerys Matthews MBE was lead singer of the Welsh  rock band Catatonia.
They released four albums between 1996 and 2001 all on Blanco Y Negro of which I own one namely International Velvet from 1998.
You often see their albums in charity shops and I was under the impression that at the very least I also had Equally Blessed and Cursed.
Apparently I don't,  something I must remember next time I come across it or any of their other albums

Catatonia - I Am The Mob